Since my last post, a bunch of stuff has happened!

We filmed Matt's movie the second week of August!
Two +12 hour days in a green screen studio! We all had a lot of fun and got everything done! :D 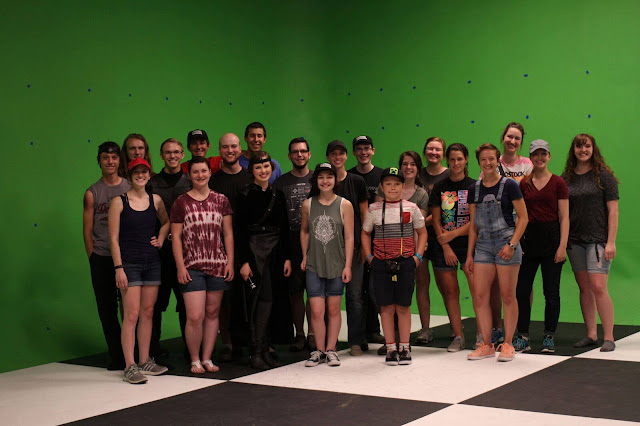 At the end of August and the start of this month, I got really busy helping some friends with their business. We've been rebranding their company, while simultaneously promoting their upcoming their movie premiere! I've been taking care of all the promoting through social media for them. So, if you see a post from Abundant House Films...that's me. :D

I've also been considering opening my own Etsy shop to sell my hand-lettering! I haven't really developed this project/idea yet, so nothing has come from it as of right now.

I've also been picking my language studies back up again, and I did something cool (language-wise) the other day! I translated a Youtube video into German, and submitted the subtitles to the video! So, when my subtitles are done being proofread, then they will be on the official video and I will be credited!
I'm really excited about seeing them when they're published! The video was a super short video, and super random, but I just wanted to actually use my German skills for something. :)

Speaking of putting my German skills to use, I'm currently working on trying to open up another blog but in German! Eventually I would like to start a Youtube channel in German, but I don't feel super confident in my German (speaking) skills yet.
Anyway, I'm hoping to get a lot of work on my blog done today, so that by the first day of fall, I can actually open the blog up. :D


Well, I got to go tackle my to-do list! Adios!

This month has been an incredibly busy one.
Matt is going to be making a short film this month, for the lightsaber choreography contest in October.
We are filming in a week (!!), so July/this week was/is pre-production, which means lots of choreography practice days, meetings, and art.
Art? What? Yep! ;)
I've been working with the DP (Director of Photography), who makes the storyboards and shotlists for films, and we've been making an Animatic. The Animatic required me to draw 100+ drawings (!), which took a few hours, and the DP is edited all of the drawings together.

The other big project I've been working on requires a bit of backstory before talking about it.
So, I have been the social media manager for our friends' growing film company for four months. In the beginning, I had a decent amount of content to post, but as time has gone on, we've run out of things to post. I really want to help my friends build their company, so they can get closer to their overarching goal!
So, I've been praying a lot recently that God would give me ideas for their company, and one night, two weeks ago, ideas came to me. I stayed up until 3am, creating a spreadsheet of ideas and I had an idea of a big step their company needs to take.

The next time I saw my friends, I talked to them, showing my spreadsheets of ideas, and they came on board with my ideas. The ideas, however, require a mass amount of work, and we're setting the deadline for the end of summer!

Rachel, who takes care of the business side of their company, and manages everything, is super busy right now, and isn't able to head this project. So, I have become the project manager for this.

We started one part of the project, but then we realized an issue that is going to prevent of from moving forward, so before we work on the actual project, we have to deal with this issue.
And that issue is branding!

So! This project is requiring me to spend a lot of time and mental energy toward educating myself in branding, business, and also requiring me to write about 50 FB posts!

Every night, I write a long to-do list to do the next day, and the next day I wake up, eat breakfast, spend some time with the family, and then get to work!

Something else I've been doing a lot of this month, is riding my bike around town! Where we live is perfect for bicyclist! A lot of people ride their bikes to work or on errands...it's also a place for golf carts. Like, everywhere.
It's been really fun! There was one day that I invited the Johnson girls to get a coffee, so I rode my bike to Starbucks, and then I rode home!
When I was younger I would imagine living in a place where I could go on errands on my bike, and now I'm getting to do that!

Fun fact, mentioning that I've been riding my bike a lot this summer came in quite handy when talking to the dentist a few weeks ago. Apparently my dentist takes cycling classes at the gym and really likes it, so that kept her talking for a while. Which was nice, because that meant she wasn't asking me questions while having instruments in my mouth! Why do dentists always like to ask questions when they've got their hands in your mouth?!

I have some cool news! So, I had been praying for a while now for a laptop and drawing tablet. I had been sharing Morgan's computer for months now, and it's gotten really hard because all the work that I do, is computer required tasks. And I wanted a drawing tablet so I could start doing a lot of animatics.
Wellllll, in June, Ashley and Matt gifted their old car to me to do as I please, and then July 1st, I sold it for the exact amount of money that I needed for my tablet and laptop!

I've been able to get wayyyyy more work done now that I have my own laptop, and I was able to do the animatics for Matt's movie on my tablet!

We don't have a lot of pictures from this month, but here are some:


And that was our July!